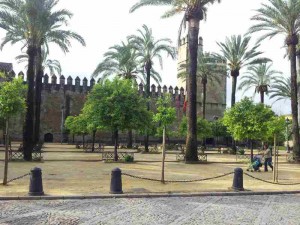 This palace is technically known as the Alcázar of the Christian Monarchs. In the earliest of times the site where the Alcazar now stands contained a fortress built by the Visigoths. The fortress that is there today was originally an Arab fortress that they built in the 8th century. In the 12th century the fort was taken by Christian forces. It served as a residences of Isabella I of Castile and Ferdinand II of Aragon at one time. During the Spanish Inquisition the Alcazar figured as a prominent location of some of the tribunals. The Spanish government made the Alcazar a tourist attraction in the 1950s.