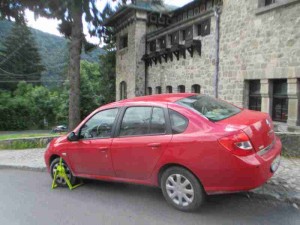 It seems that it works the same way in Romania as it does in the states. At least I’m assuming that it does. I would guess that you get enough tickets and you get booted when you don’t pay them. It was a nice car in a nice neighborhood in Sinaia. The house behind it would have been a really nice house in virtually any city in the world. Did the car belong to this house? I had no idea. I just know this wasn’t the only car in the neighborhood with a boot on it. I’m not sure which is more sad, giving the boot or getting the boot. Maybe both. Double sadness.