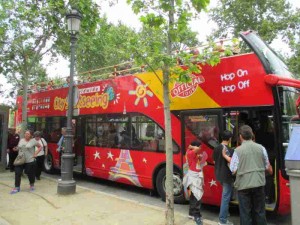 I’ve ridden hop-on-hop-off buses in a lot of locations. I used to ride one every chance I got, but the truth is that they aren’t really as efficient as I once thought they were. Now if you’ve only got a day or two and you’re in one of those classic tourist destinations like New York, London, or Paris, they are a reasonable alternative. This is the HOHO bus in Seville. I bought a ticket. Was it a good deal? I thought so in the beginning, but I changed my mind later on. It cost me 16 euros, about $22. The ticket gave me two days of use. I did ride it frequently for two days. Plus, it seems that I substituted the HOHO ticket for a day pass on the subway and bus system, which wasn’t all that good anyway and cost 4.5 euros for one day and 8.5 euros for 3 days. Maybe the HOHO pass wasn’t such a bad deal after all.