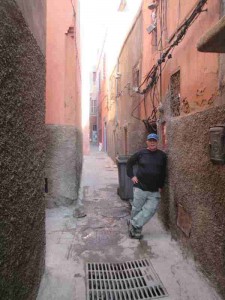 That’s me. That’s the street, alley, path, walkway, or whatever you want to call it that leads to the hostel where we stayed. The hostel was actually at the end behind me. It was a dead-end. There were no cars that were going to drive down this lane. We rarely saw anyone that wasn’t coming or going to the hostel. Street noise was virtually non-existent. The place was so hard to find we had to pay someone to take us there. Luckily, they only wanted 10 dirhams or $1.25. Strangely enough, that’s how a lot of young people make money in Marrakesh. They take tourists places. The charge the tourists for taking them around places. It’s kind of a hustle, but it can be so easy to get lost in a medina and it can take you hours to find your way back out. That’s because there is a significant language barrier between the tourist and the locals. Plus, the larger medinas in Morocco are truly mazes that take a while to figure out. Most tourists don’t have that kind of time. This picture is of a relatively simple street. When you get into the commercial area of the medina things get really crowded and chaotic. Getting lost in the medina isn’t really an option. It will happen. You just have to understand that and let it happen and then deal with it. In a way, it can be fun. It’s certainly an experience.