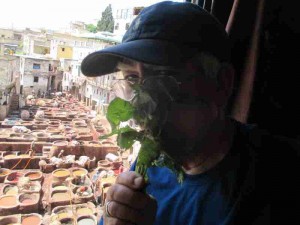 The picture does not even begin to tell the whole story. Fist, of course, is the experience of getting lost in the Fes Medina, the largest medina in the world. Once we accidentally found people who were unloading hides onto donkeys, we followed them to the tannery. It seems that streets near the tannery are too small for anything other than a donkey and a person. Once we found the tannery we had to find an observation point that was not too close to the actual process itself. People had told me that a lot of people got a little sick when the caught the odors coming from the tannery. Once we found a good observation place, we were given mint by the shopkeeper to keep us from being overcome by the fumes. Everyone got the mint, not just us. The shopkeeper who had the observation point for the tannery was selling products made from leather. I didn’t dare drop the mint and take a whiff. We were way-too-close. I caught enough of the place from 100 yards away down in the street. Was the place interesting? You’re kidding? Right?