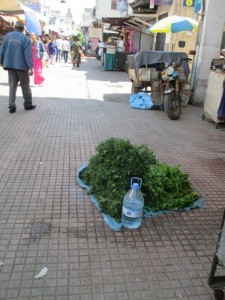 This is a picture that I shot in the Medina of Rabat. It’s not the best picture I could have taken of the mint that I saw for sale in Morocco. They sell s lot of mint in the country. You see, mint tea is the favorite drink in the country. They lovingly call it Moroccan Whiskey. I’m not sure why. It doesn’t give you a buzz unless you put too much sugar in it. It is tasty, but not addictive. It won’t give you a hangover. Moroccans just seem to really, really like it. There are guys running around all over cities in Morocco delivering mint tea to shop merchants. The sell the mint everywhere. It’s a huge seller in the medinas and markets. It is grown everywhere they have some dirt. I drank more mint tea in the two weeks I was in Morocco than I have at all the other times of my life combined. I think. I admit it, I’m appreciative. But, I’m not a convert. I’ll stick to cheap whiskey, some brandy and a little Courvoisier for special occasions. The tea I still drink will probably be standard strains from teas producing countries. But don’t be surprised if I start growing a little mint at home for some mint tea.