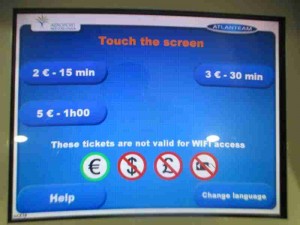 It’s late and I’m in the Nice Airport waiting on the bus that will come and pick me up to take me to Barcelona. I probably should have taken the train but the cheapest I could have gotten a train for was 104 euros and the bus was only sixty euros. Had I booked 30 days ahead of time I could have gotten the bus for 36 euros but that’s another story. Plus, the bus trip runs from midnight until 10:00 AM, meaning I can sleep on the bus and save the cost of a night’s lodging and not waste a days’ worth of touring. Always thinking. Sometimes not too clearly, but always thinking. Yet, this post is not about the cost of getting from Nice, France to Barcelona, Spain. It’s about teaser Wi-Fi. More specifically, the teaser Wi-Fi at the Nice Airport. When I first found it available in the building I thought it was great. It worked well. However, the more I used it the worse it got. It required me to log in again. And again. It got slower and slower. I tried to call my wife on Skype and it was too slow to call her. I think it was teaser Wi-Fi. I think they slowed it down and slowed it down and slowed it down the more you used it until you became so frustrated that you paid to use the good stuff. You, of course, may say “They wouldn’t do that would they?” Well, why wouldn’t they? You think that computer people have more ethics than anyone else? Well they probably do. But, the people making these kinds of decisions aren’t computer people. They’re management, marketing, and operations people, not coders. Coders just do what they’re told. Plus, even if I could prove that they were actually slowing down the free system to get paid business, what could I do about it? You think they have a Better Business Bureau in France? I doubt it.