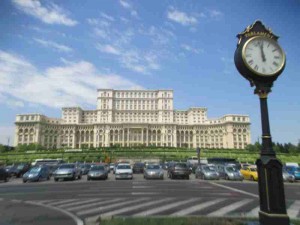 What can you do if you are a dictator of a country? Anything you want. This building was originally named Palace of the People and was built under the orders of Nicolae Ceausescu, the dictator of Romania from 1967 to 1989. It is one of the most impressive buildings I have ever been in. The building is huge, having about 3,700,000 square feet of floor space. The building has been controversial since the beginning. The construction may have caused untold hardships for millions of Romanians, as it’s cost is virtually impossible to calculate. It is said that 20,000 people worked in shifts around the clock for years to get it built. The sheer size is incredible, but the inside really is a thing of beauty. An unimaginable amount of marble went into the construction. It is said that everything that went into the building came from Romania. The building became a huge White Elephant. After Ceausescu’s trial and execution there was talk of tearing it down or turning into a multi-use commercial enterprise. I like it the way it is, even if it may take an overwhelming amount of money to keep it operational.