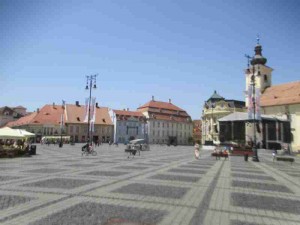 This is Piata Mare in Sibiu, Romania. It is the main square. Sibiu has some history. According to the Official Romanian Tourism web site “During the middle of the 12th century Saxons came to the area from the Luxembourg, Lorraine, Moselle, Rhine and Wallonia regions of northwestern Europe. They called their new home ‘Siebenburgen’ (Seven Fortresses – in Latin Septem Castra) after the seven major walled towns they built here: Bistrita (Bistritz), Brasov (Kronstadt), Cluj Napoca (Klausenburg), Medias (Mediasch), Sebes (Seh besh’), Sibiu (Hermannstadt), and Sighisoara (Schassburg).” Note that I went to three of those cities. Sibiu was the last before I head home. Notice how empty the square is. Eight hours after this picture was taken you could barely walk in that square it was so crowded.

Sibiu is one the fortified cities that