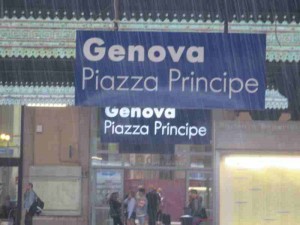 I got into Genoa, Italy from my overnight ferry trip. I was a little spacey. I definitely did not have one of my better nights sleeping. Then again, what do you really expect sleeping in a chair on a ferry? The next time I may rethink my decision not to have a bed in a cabin. But, whatever my mental state of mind I had to get on a train and make it to Nice, France where I had a reservation for the night. That, of course, is never as simple as merely saying it. First I had to find the train station. I did that. Then I had to get a ticket on a train. That wasn’t as easy as I thought. The fist train was sold out so I caught the second train. In the interim I had a couple of hours in Genoa. I’d been there before. While it’s a city with history, it’s hardly a tourist hot spot. Notice in the picture that there was quite a bit of rain coming down. Sometimes, it not only rains in Spain, it rains in Italy as well.