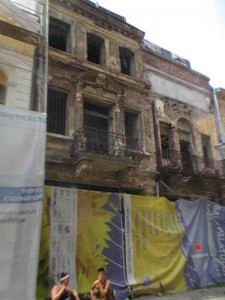 I took this picture while I was on the free walking tour of Bucharest. One thing I found interesting was what happened with the fall of Communism in Romania in 1989. It seems that property ownership became a fairly straightforward issue if you lived in a building built during the communist period. You got to buy the dwelling at a very fair price. However, for buildings that were built before the communists seized power in 1947 things were not so simple when the government changed in 1989. The owners prior to the communist seizure of all property in 1947 could lay claim to the property. However, they had to prove in court that they were the legal owners of the property before the communists took power and many records were destroyed during World War II and afterwards. In essence, a lot of property in Romania was tied up for years in the courts. From what I understand there is still some property where the ownership has still not been clearly resolved one way or the other. That property just sits there until ownership is decided. Most of this property appears to be commercial property. At least this is the story I got from out tour guide. I found the whole issue to be fascinating.