Pictures of another day of riding a bicycle in Bucharest, Romania. Notes follow. 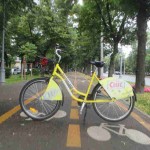 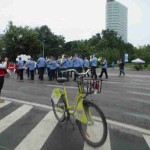 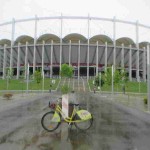 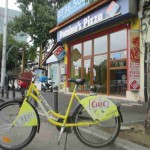 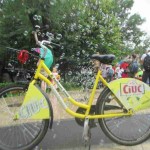 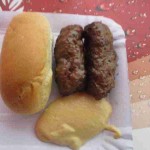 Pic 1: Bucharest has a lot of miles of bike paths. This is one of them. The very best bike paths are in the city’s wonderful parks. Unfortunately, too many miles of the bike paths are hardly in the same great shape that the bike paths in the parks are. Pic 2: I’m riding through a park and along comes a parade. Since it was a little difficult to try and ride through it I just stopped and enjoyed it. Pic 3: It’s the football (soccer) stadium in Bucharest. Pic 4: I saw a Domino’s Pizza in Bucharest and thought it would make a nice shot. Bucharest has many American fast food chains and the all seem to be doing well. Pic 5: I was riding along in one of the city’s many parks and someone was having a small festival. It seemed like I ran into a lot of festivals in the parks on the weekend. Most of them were smaller ones. At this particular festival they had the coolest bubble making machine I had ever seen. Pic 6: I went to Obor, a rather large open-air fruit and vegetable market in Bucharest. I smelled meat cooking on a grill. It turned out to be a stand that sold beer, sausages, and rolls. Two sausages and a roll cost me about 80 cents. It was really good.