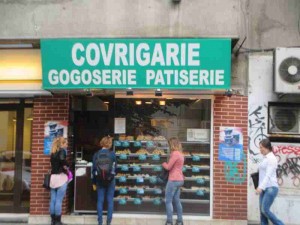 Let’s talk Love/Hate for a moment. That’s the way I felt about the place you see in the picture. It is a bakery. You could watch them preparing the baked goods and sliding them into the oven. It was only two short blocks from the hostel where I stayed in Bucharest. While the bakery was not 24/7 like the store down the street, they opened early enough for me. I would go there in the mornings and get some tasty bakery products like a cheese roll or a strudel. Sometimes I would get a croissant. My three favorite fillings were peach, apple, and cherry in that order. That’s probably more than I should have told you. But the worst part was how often I would ask for an item and find that it was still warm when they handed it to me. That was not good. It made it all too likely that I would go back and get another one, hence my first thought when I looked at the picture of this place – Love/Hate. I hope you understand.