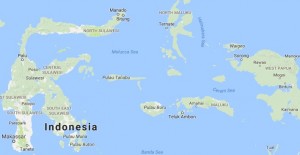 Makassar ,Ambon and Sorong are three cities in Indonesia. Interestingly, the geographic areas where they are located are also three countries in the Travelers’ Century Club’s (TCC) list of “countries” that they publish. This means that, if you go to all three, the TCC allows a member, or anyone else for that matter, to claim that they have been to three countries, not one, even though the three cities are all in Indonesia. This has to do with the fact that, at one time, many, many places were there own politically acceptable entities and had complete autonomy. While the TCC has its own reasons for what qualifies as a “country” the totality of their logic tends to escape me to some degree. Why is one area and not another a country according to their criteria? Their website makes several statements to help clarify what a “country” actually is, according to the club. The “country” clarifications on their website is located here.

To make everything really simple, let’s just say that I use the TCC list for a couple of reasons. The first one is that it’s the very best list of countries that I’ve seen. It is created by people who actually travel. Believe it or not there are a lot of people who are travel experts that don’t really travel much.  When people actually travel it makes them a bit different than people who don’t travel extensively. While I think that very few of the club members travel like I do, I do believe they travel. As a group I think they are some of the most well-traveled people in the world. At least I think they have, on average, been to significantly more places than the average person who writes about travel. After all, 100 countries is a significant number. I’d be very inclined to trust their collective opinion.

I also use their list because it is readily available. It’s there. It will get updated by a vote of the members. That makes it something of a refereed list. Refereed lists are better than dictator lists.

Why is the list important to me? It’s because when I say that I’ve visited a certain number of countries that number comes from my having been to locations on the TCC list. While that’s good, it’s also bad because, sometimes, I go to locations and don’t really spend much time there. This allows me to say that I’ve been to a country, and while that is factually true, in spirit, I always feel like I need to footnote that I was only in a “country” for a few hours. Maybe I should feel good about wanting to be overly honest but the simple truth is that  I actually did visit the location and how much time I spent there shouldn’t make any difference. I was there. One thing I learned a long time ago is that people can spend years in a location and not really have a clue as to what all is there. As a contrast, some people can go to a location for a few days and know it like the back-of-their-hand. It almost doesn’t matter how long you stay in a place. Some cities, like Paris, require weeks to get it all. Others, like my hometown, aren’t really worth a visit unless you really want to go there.

This post is entitled Makassar – Ambon – Sorong for a reason. I’m only going to those locations to accumulate three more countries that will be on my list of countries visited. I have no intention of seeing anything in these locations other than the airports. In a way I feel this is somewhat deceptive, but here I am in this part of the world and they are on my way to my next somewhere else. I will simply make a stopover. I will have to get off of the plane and, at least theoretically, spend a little time there. While it bumps my country count, I feel a little guilty that I’m not spending several days there checking them out but the truth is that, unless you are a resident of Indonesia, or someone that is really into world travel, it is very unlikely that you have ever or ever will hear of these locations. I can remember telling the lady at the Jetstar check-in counter that I was going to Makassar when she asked me where I was going when I left Bali and she asked where that was, not having any idea of where Makassar was actually located. When I ask Google to list the Makassar attractions they list several but only three have any description at all. Google only lists four attractions for Ambon and none have descriptions. Google doesn’t list any for Sorong. This isn’t like I’m going to London.

The point is that I feel like something of a fraud for taking advantage of the fact that I was so close that I just had to book a little extra airfare to rack up “countries” that I would probably never consider visiting if they were not on the TCC list. But they are and I’m going to count them. But, I am publicly apologizing for not spending more time there. Sometimes, I simply have the mentality of a gunslinger looking for a few more notches and I feel bad about it.

Then again, I did spend years driving around the United States with one of my main goals being to see as much of it as I could. People should note that the U.S. is one of the most attraction-rich environments in the world, and I only able to count all of that travel as only one country. I guess all that time I spent wandering around New York, Los Angeles, Chicago, Houston, Philadelphia, Phoenix, San Antonio, San Diego, Dallas, San Jose, Austin, Jacksonville, San Francisco, Indianapolis, Columbus, Fort Worth, Charlotte, Detroit, El Paso, Seattle, Denver, Washington, Memphis, Boston, Nashville, Baltimore, Oklahoma City,  Las Vegas, Louisville, Milwaukee, Albuquerque, Tucson, Long Beach, Kansas City, Mesa, Atlanta, Virginia Beach, Omaha, Colorado Springs, Raleigh, Miami, Oakland, Minneapolis, Tulsa, Cleveland, Wichita and New Orleans was a waste of time. Then again, maybe it wasn’t and maybe I’m not such a fraud after all.