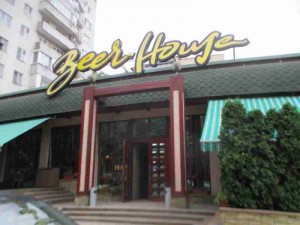 This is one of the bars in Chisanau. It’s listed by Lonely planet as a good place to drink. When I looked at Lonely Planet’s advise on what to do in Chisanau in two days, they said to go out at night and drink a lot. They said that Chisanau’s party atmosphere is rated really, really good. Maybe I should have spent more time in the bars in END_OF_DOCUMENT_TOKEN_TO_BE_REPLACED 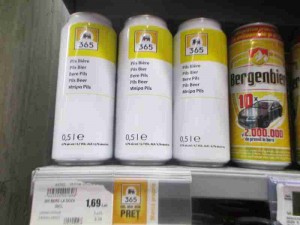 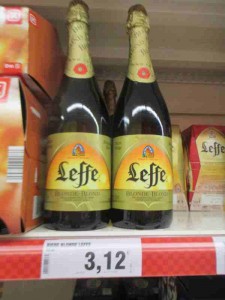 Okay, I admit it. The vast majority of items for sale in Nice, France are grossly overpriced compared to what I can buy them for in the U.S.. I was looking at an avocado today that cost two euros – almost $3. I thought “Wow! I can get that same avocado on sale at home for about 35 cents and about 80 cents when it’s not on sale.” Ditto for almost everything else there is for sale at the supermarket. However, the one thing that is priced considerably less is alcohol. This is one of my favorite beers in one of my favorite sizes, extra large. The price for this bottle of beer is about $4.50 in U.S. dollars. END_OF_DOCUMENT_TOKEN_TO_BE_REPLACED 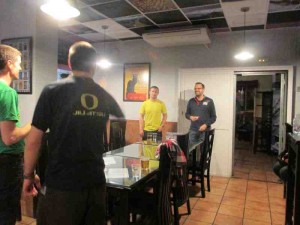 If you’ve never played beer pong, it’s time you started. According to Wikipedia, “Beer pong, also known as Beirut, is a drinking game in which players throw a ping pong ball across a table with the intent of landing the ball in a cup of beer on the other end. The game typically consists of two teams of two players each with 6 cups set up in a triangle END_OF_DOCUMENT_TOKEN_TO_BE_REPLACED It’s dinner at one of the camp sites we visited. This one was a catered camp site. This means that the guys who were taking us around in the jeeps had a support crew with them who took our tents and they were all set up for us when we arrived at the camp site. Normally, we have to put them up ourselves. They also took them down and moved them to the next camp site. Also, we usually had tea and popcorn waiting when we arrived. Beer was, of course, always close by. Plus, the crew did all the cooking and other tough stuff so we just enjoyed ourselves. The food was also a lot better than the group fixed back in the normal camp sites. There was talk among the group about kidnapping a couple of the support crew and taking them with us to Cape Town to do the cooking and setting up/taking down the tents. Of course we would have paid them double what they were making at their current positions and provided them with bus fare back home. It might have happened had someone not astutely pointed out that they probably had no passports. This was the little hole-in-the-wall joint that was across the street from the guesthouse that I slept in in Vientiane, Laos. I could get a Beerlao for under and dollar and a bowl of pho and a Beerlao combo for under $3 for both. That made for a really nice breakfast. I noticed a lot of the boys at the guesthouse seemed to enjoy Beeloa for breakfast. I was trying to fit in. This is what makes Luang Prabang so special in my mind. It’s the sidewalk cafes that are everywhere. This town just operates on a totally different set of biorhythms than so many other places. Sidewalk cafes like this one are so inviting. They just lure you in. This one overlooks the Mekong River and I can sit for hours and watch the river roll by and the boats go up and down the river and the tourists and townspeople walk by. That’s the trouble with Luang Prabang. It just sort of sucks you into that lazy lifestyle. I get up in the morning for that Lao coffee and a late breakfast at a sidewalk cafe. I walk around a little. See some stuff. Then I go back to the guesthouse a little after the noon hour for a cold shower and a nap during the heat of the day. I go back out on the streets in the late afternoon for a little more sightseeing and then dinner at one of the stalls at the night market and end the day with a few Beerloas and some good conversation at another of the local sidewalk cafes. I got out of that city as soon as I could. I loved the sandwiches in Luang Prabang. You could get them in a variety of flavors. You could get chicken, ham, fish, etc. All of them came on a really nice baguette with your choice of condiments and veggies. The best thing was the cost, a mere $1.25, and you could get one of these beauties all over town. Find a nice place to sit, pop the top on a liter bottle of ice cold Beerlao and life doesn’t get much better. Did I mention I got sucked into the lifestyle in Luang Prabang? Here’s another way to get sucked into the lifestyle in Luang Prabang. Find yourself a nice sidewalk cafe, grab a Beerlao and watch what happens to the sun. It’s a liter bottle of Kingfisher beer. I’ve been told that the Kingfisher brand is used on several items in India, beer being one of them. The beer is a lager. I wouldn’t say it was a particularly good lager, not would I say it’s a particularly bad lager. If I were a drinking man, which I am, and drank lagers, which I do, I would drink Kingfisher lager if there wasn’t a better value around. This liter bottle of beer cost me over $3, not what I consider to be a particularly good value in beer. I would assume that, if I were in India longer and needed beer more than I do, I would find good deals on beer. This wasn’t one of them, although the view of the Jaisalmer Fort after dark from the restaurant where I sit and drank the beer was quite good.