These are publishers that provide Kindle Unlimited summaries of significant books (and some not-so-significant ones).

It Will Be OK – Backpacking The Ouachita Trail

Top 5 places to camp during the fall in Oklahoma

We Summited the Highest Peak in Oklahoma, Black Mesa

To find out who flies into and out of an airport there is a website located here that can give you that information. They have arrival and departure information for most of the world’s airports.

Route Maps – There is a website dedicated to showing airline route maps. It is located here. I have no way of knowing how up-to-date the maps are. It did not list all airlines when I originally found the site. Air Sunshine was not listed, for example. It is worth examining, however.

Air Sunshine – Route Map. Has prices on the Flights/Fares page.Some fares under $100.

Jordan Peterson’s 12 Rules for Life is a pretty popular book. I’ve read it. I get it. To a point. That point is probably a function of my own biases, beliefs, and perspective. I’m not real big on “rules” and it’s not because “rules are made to be broken” or other such nonsense. It’s because rules don’t tend to be flexible and allow reasonable exceptions. It’s also because some people take advantage of rules and that causes a reasonably good rule to be altered to become a fairly bad rule for the majority of those who didn’t take advantage of the rule. END_OF_DOCUMENT_TOKEN_TO_BE_REPLACED

I’ve seen most of the Top 100 Hillman Wonders. There’s still a few more I want to see. My travel philosophy is that it’s not about where you’ve been, it’s what you have seen, tasted, touched, heard and smelled. You can shorten the previous sentence to experienced. This post is about the Hillman Wonders I haven’t seen but intend to see. The following is a breakdown of those Wonders. I’m going to work on the list during the next few weeks as I get a moment here and there. END_OF_DOCUMENT_TOKEN_TO_BE_REPLACED

These are the songs I like listed by author. END_OF_DOCUMENT_TOKEN_TO_BE_REPLACED

They start off small. Very small. They start off as thoughts. Often, they’re thoughts about previous road trips. They don’t last a long time. But, they grow. They happen more often. Pretty soon, you’re conscious of them. That’s when you know. A road trip is in the making. It’s just a matter of time. I reach a point where I start thinking about planning because that’s what I do. That’s who I am. 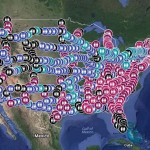 When I was a young man, I road-tripped often. As I got older, the road trips became less frequent until there was a time when I never left home without my wife or some of my children. Then, as the nest emptied, I started to wander a little more. And more. And more. Today, I take several months a year, on average, and I go somewhere. Sometimes it’s in the United States. Sometimes it’s in Europe or Asia or Africa or South America. Next year, in 2018, I think that it will be in the United States in the Spring and in Europe later in the year. This post is the first one for getting my material in order for the trip.

The image that you see on the right is from a Google Map. It’s located here. Actually, there is a whole websited dedicated to the subject. I originally thought it was created by the people who publish The Next Exit, but now I believe it’s put out by Roundabout Publications, a group which publishes material for people who live the RV lifestyle and like to move around a lot.