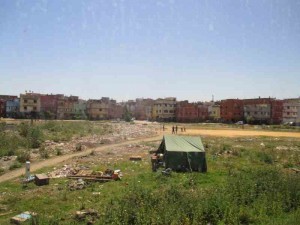 I took this picture from the train. I took a lot of pictures from the trains in Morocco. One of the reasons was because I rode a lot of trains while I was in the country. Train travel was relatively cheap and reasonably quick. It was also relatively comfortable. The trains were modern. The seats were nice. I could get a seat that had a tray so that I could use my laptop and work if I wanted. The scenery was another reason. It’s kind of hard to see what the countryside looks like from 20,000 to 35,000 feet up in the air. This picture shows a countryside that is not all that attractive. I shouldn’t have used this picture. It’s not really the most representative of all the landscapes I saw. It is, however, one of the more impactful. Yes, there was a lot of trash in the countryside and in the cities. Yes, there was poverty. But the typical Moroccan countryside would have either been a fertile field growing an agricultural product or a very barren landscape with rock and dirt.

In the north, and along the Atlantic coastal regions the fields were quite full of all kinds of farming endeavors. It was clear that people in Morocco were successful in growing grains, fruits, and produce. I was surprised to see how good the farms looked. Once I got inland the landscape changed. It became very barren. I was told that a few miles south of Marrakesh the Sahara Desert takes over the landscape entirely.