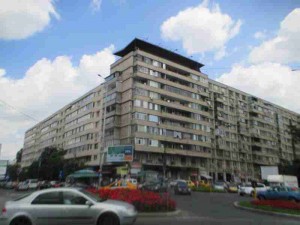 You see these everywhere in Eastern Europe. The communists were really into building blocks and blocks and blocks of apartments where all the apartments were identical. Personally, I don’t see a problem with it. It only makes sense to me. That type of sentiment is why I will never get elected to public office. I’m much too practical. This picture is of one building. This building is across the street from the train station in Bucharest. I thought it was a classic in terms of old communist block apartments. The place was run down, there was a lot of laundry in sight. From the outside it doesn’t look like a place that anyone would want to live in. I was told that when the communists were in power you lived wherever they told you to live and you were just happy that you weren’t in a place that was substantially worse. Sometimes we all have to be thankful for what we have, even if it’s not much. I still think that places like these are really practical. It’s too bad no one else does.