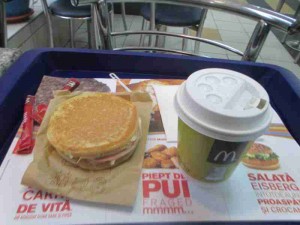 It’s what I had for breakfast on my first morning in Chisanau. I really would have preferred a Sausage McGriddle, Egg McMuffin, or a Breakfast Burrito. But, they weren’t on the menu. The McToasty was and it was combined with a coffee in a combo special that made the McToasty almost free. I saw a lot of places on my trip to Europe that had toast on the breakfast menu. That didn’t just mean bread. It meant some toast that was usually to be found with some meat and cheese inside. The meat was usually ham. The cost was often around one dollar or less. It made for a reasonable breakfast. It was a fairly good way to start my day when I was already out on the move. They were often sold at kiosks near transportation sources making them easy to access. My favorite one was located at the bus station in Valletta, Malta. Man, that was a tasty grilled ham and cheese toast treat in the morning. I think they must have used some kind of special sauce. The one at McDonalds was satisfactory. Perhaps the best thing about it was that a McToasty and coffee combo it only cost only slightly more than a coffee itself.