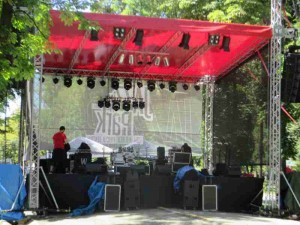 I have a habit of getting a transportation pass and riding various forms of transportation around a city. I was riding a bus around Cluj just to take a look at some of the neighborhoods. The bus stopped in a really nice park next to the futbol stadium. I got off the bus. It turns out that they were having a Jazz in the Park event. There were plenty of people who where there to set up booths and there was a bunch of people setting up the sound stage. There were also people who had shown up to watch and people who were there for the normal, everyday park kind of stuff. I was there to observe. It’s really nice to wander into such situations. It makes for a rather pleasant and spontaneous day. I might have come back for some of the festivities later on but I had to leave early the next morning, plus I wasn’t sure what time the buses would stop running.