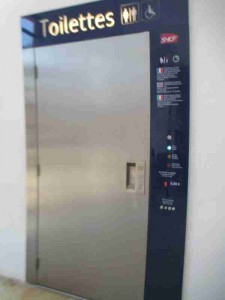 I probably should not have named this with the name of a town in the title. Now people will associate it with Antibes, France. But the pay to pee issue isn’t unique to Antibes, France. It’s everywhere in France. France has solved the toilet issue by placing pay toilets everywhere. Actually, they are somewhat common in Europe in general, but they are particularly noticeable in France. Everywhere I went I saw toilets that had to be paid for to use them. Here is the perfect example. It’s a pay toilet at the train station. You’d figure that you could pee for free at the train station, wouldn’t you? Not a chance. The only thing I can say that’s good about it is that it costs half-a-euro, or about seventy cents. I’ve seen them cost $2 in some locations. Even at McDonalds in Nice, France there is a sign that says you must go to the register and ask to be buzzed in if you want to get into the restroom. The point is that you need to be a customer to use the rest room there. In the future, I predict that real men may only pee twice a day.