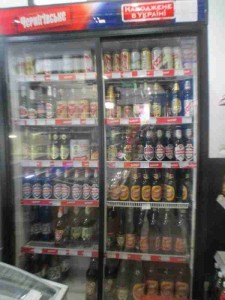 My friend Paul and I really liked the shawarmas at one the the restaurants close to the hostel. They were excellent and we split one every day I was in Odessa. Unfortunately, they didn’t sell beer. However, they had no problem with people bringing in beer from the store down the street. This is the cooler where Paul and I got out beer before we went to the shawarma place. Notice that there is a wide selection. Most of it was around a dollar but some of it got as high as two dollars for the good stuff in bigger containers. You could get a two liter jug for about $2.50 but that was a little more beer END_OF_DOCUMENT_TOKEN_TO_BE_REPLACED 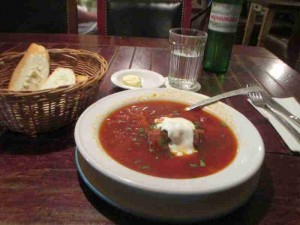 I got off the train in Odessa, Ukraine and I checked into the hostel near the train station. I decided to get something to eat. The guy at the hostel recommended a restaurant down the street. I go there. It’s one of those overpriced, underwhelming places that are all too common in the world. Face it, I’m a buffet, cafeteria, or pot luck kind of guy. END_OF_DOCUMENT_TOKEN_TO_BE_REPLACED 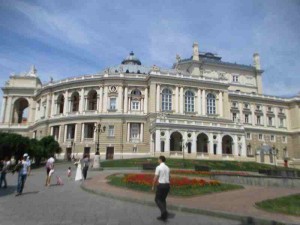 This is the side view of the Odessa Opera House. People say it’s one of the best in the world. According to Wikipedia, the “unique acoustics of the horseshoe-designed hall allows to deliver even a whisper-low tone of voice from the stage to any part of the hall.” It originally opened in 1810. The latest version of the opera house was redone in 1966. Ticket prices at the opera house range from $2 to about $15. If you would like to get some idea of the productions and the cost of the tickets for each production they can be located here. 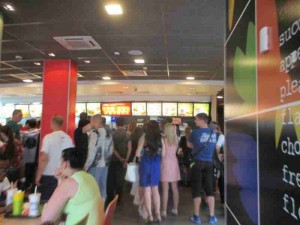 I arrived at the train station in Odessa, Ukraine. When I walked out of the train station and I started to head to the hostel where I would be staying I spotted a McDonalds. I went to have a look. What did I find? A very busy burger joint. Odessa likes their Big Macs and ice cream cones. The lines at the counters were jammed-packed. There was hardly a seat anywhere either upstairs or downstairs. I’d say that’s popular. There were a few seats outside, but not many. Did I eat there? No, but I did get a cone later on when the rush died down and I was passing by. 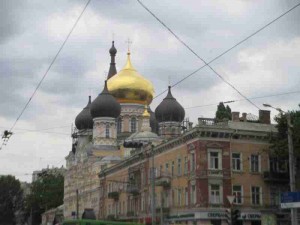 They have some really nice tops on their churches in Eastern Europe. These are Orthodox churches. That’s a little different from regular Catholic churches, although they do have Catholic churches in Eastern Europe. The term Orthodox comes from the Greek words orthos and doxa. They mean correct belief. Who am I to argue. I think their churches are pretty cool. I think there is quite a bit of difference between the Orthodox faith and Catholicism. One of these days I’m going to spend some time learning a bit more about the Orthodox religion. 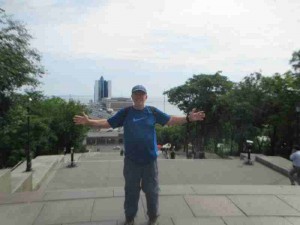 I went to the Potemkin Steps to see what all the fuss was about. It seems there are 192 steps that are made famous by a silent movie done around 1925. In it a lot of people are murdered on these steps. The director was Russian. At the time his movie was considered really violent. Today, I’m not so sure. I’ve never seen the movie. But I’ve now been threatening to find the scenes with the steps in it and watch it. I’m hoping that happens soon. 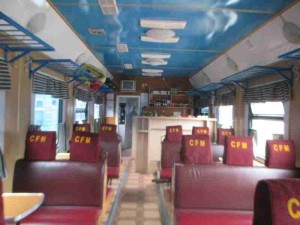 I took the train from Chisanau, Moldova to Odessa, Ukraine. It was a nice train. I’d call it 1950′s Club Car if you were to ask me what the decor of the train was. I kind of enjoyed it. I could have had beer but I opted for coffee instead. Got to keep my mind sharp for interrogation from Ukrainian border guards. I speak no Russian. They speak very, very little English. This should be interesting.